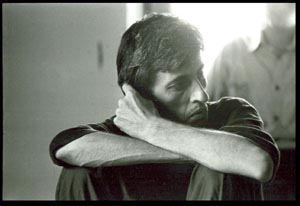 During 1968 and 1974 Irakli Parjiani attended the Faculty of Painting at the Tbilisi State Academy of Arts. His art holds special place in the history of the development of Georgian easel painting due to the individualism and originality of its pictorial language. Parjiani’s artistic world stands on the verge of the real and the unreal. His emotional and aesthetically immaculate compositions imbued with underlying messages and symbols, with their irradiating images and colors, are the bearers of biblical serenity enriching the scenes, quite common at first sight, with mystical mood. The characteristic conditionality of his pictorial images, the slow rhythm of compositional motives, the rich picturesqueness of waxen crayons and his virtuosic execution attach amazing figurative and colorful expressiveness to his pictures. Such mood of the as if “vanished” reality and of the ephemerality of life, present in all of his compositions, portraits or still lives, is yet particularly evidently manifested in his compositions on religious themes and his illustrations to the Gospel. This is the mood that reflects the personal life-story of the artist as well as of the eternal problem of harmonious cohabitation of man and the universe.

Irakli Parjiani was born on 22 May, 1950, in the town of Mestia, Upper Svaneti, in Georgia’s highest mountainous region.
The ancient Svanetian towers, the frescos and mural paintings well preserved up to this very day, old manuscripts, snow capped mountains, the Svanetian songs and dances make a unique impression on the visitors. Upper Svaneti is located 700-2200 meters high above sea level. Adjacent is the village of Ushguli which is considered to be the highest inhabited place in all Europe. Compared to other regions of Georgia this corner was more protected and therefore, it became a treasury of the unique cultural monuments of Georgia. Irakli Parjiani spent his childhood and young years there, in Mestia, in an environment of snow white peaks and mountains covered with coniferous forests.

Little Irakli grew up in the environment of artists and started painting at an early age. He attended preparatory courses in Tbilisi and after leaving school he took the entrance exams at the Department of Painting of the Academy of Art.

Irakli Parjiani studied in the Academy of Arts from 1968 to 1974; for the young artist those were the years of continuous quest, self-knowledge and self-assertion.

In 1974, he graduated from Tbilisi Academy of Art.

In 1977, the painter presented to the Academy his diploma work – “The Pastor’s Family”, which was rejected because of its religious content. Later, Irakli presented another picture – “The Family” before the commission and finally, he was granted a diploma. After this, he engaged himself in free creative activity.
In 1978 he starts working on copying the Gospel of St John. Irakli Parjiani was well acquainted with world miniature painting: Georgian, Byzantine and Persian art. Hence, miniature turned out to be his most beloved genre. This is how Irakli comments upon his miniature illustrations of the Gospel: “Those are sketches for future large scale paintings”. Irakli Parjiani was diligently preparing himself to undertake this large-scale project during a whole year. He studied old Georgian manuscripts at the Institute of Manuscripts of Georgia and worked systematically on perfecting his calligraphy.

. It should be emphasized that in the entire Georgian and post-Soviet school of painting, Parjiani was the first to discover and use oil pastels. In the 80s he starts producing the desired pastel colors for his pictures and thus, paved the way to the specific, Parjiani style in painting.

By invitation of his friends,  he travels beyond the borders of the Soviet Union to East Germany. Together with his familly wife Asmat Parjiani and daughter sofia he travels to the most picturesque towns of East Germany: Jena, Weimar, Erfurt, Naumburg, East Berlin and others. He spends almost a day in the Goethe Museum and the Cranach Museum and he enjoys the chance of visiting the Dresden Gallery to view the masterpieces of the representatives of the Netherlands’ school of painting.

It was in Berlin, where he settled with familly for years, where outstanding collection of epic paintings known as the “Berlin Cycle” was created.

In a few years, while staying in West Berlin Irakli sees the exhibits of the Check-Point-Charlie Museum and overwhelmed by the tragic fate of thousands of people he creates a painting which he called Check-Point-Charlie; this picture is a symbolic presentation of unity of a country and nation torn into two parts and very soon after, he happens to witness the reunification process of Germany.

on December 23,  at the age of 41, died the master, one of the outstanding representatives of modern Georgian painting, Irakli Parjiani.

1992 Irakli Parjiani was awarded the State Price of the Republic of Georgia.

1996 was awarded of the Highest Price for Georgian artist Pirosmani Price.

This function has been disabled for IRAKLI PARJIANI.